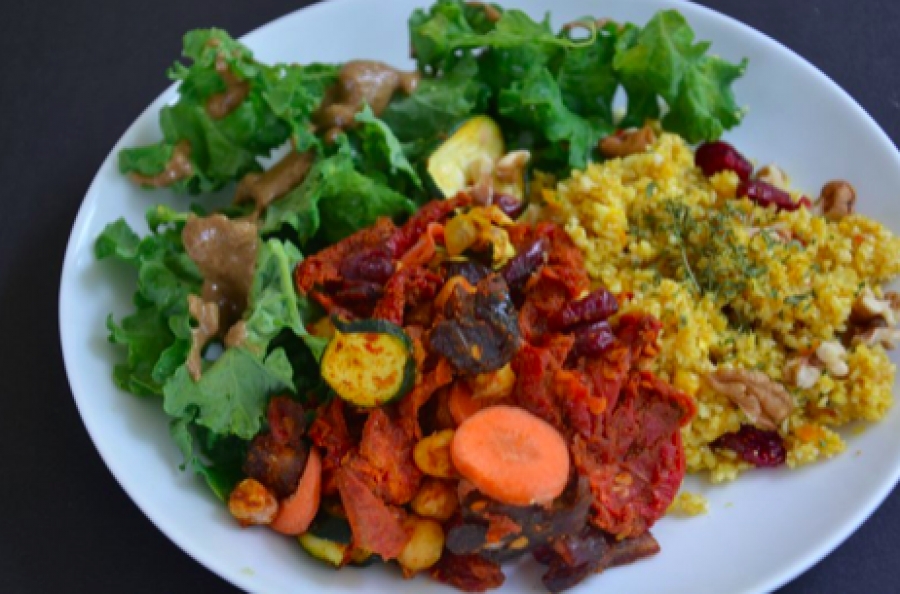 • 1C dehydrated or sundried tomatoes (not in oil)

• Juice of half a lemon

• Juice of half an orange

• Pinch of chili flakes (optional if you want it spicy)

1 Combine all the ingredients for the sauce in a food processor. Since I dehydrated the tomatoes just the night before, it still had a bit of moisture left. If you;re using store bought sundried tomatoes however, I would suggest soaking for at least 20 or so minutes before using it. Process everything to a paste. Taste, and add more salt, sweetener, or lemon as you please.

2 Transfer the sauce and the rest of the ingredients to a bowl and stir through until well combined. I would say marinate for at least half an hour or so to let the flavors mingle,although I myself marinated it overnight. Generally a longer marination period infuses the flavours more and intensifies them.

3  After marinating, put the bowl in a dehydrator and dehydrate for around two hours. If you want a warm dish I suggest leaving it on for longer. Alternatively, if you don’t have a dehydrator feel free to use your oven at its lowest temperature setting with the door slightly opened.

2 Serve along side some warmed Moroccan vegetables and any leafy greens. I used some kale topped with tahini. Enjoy!